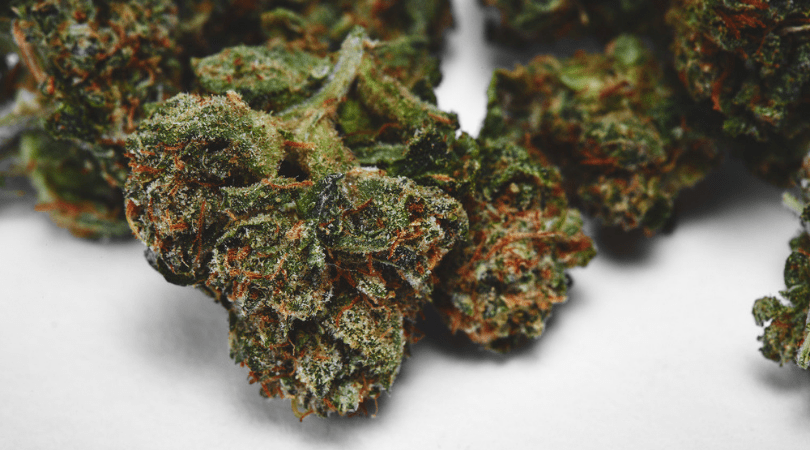 If any strain holds legendary status it has to be OG Kush. Even outside the world of cannabis, this name is often recognized. Perhaps one of the most intriguing things about this strain is that its origins remain shrouded in mystery. While some say it was created as a cross between a Hindu Kush landrace and Chemdawg, others think it was actually a distinct phenotype of another existing strain.

Even its name’s meaning is disputed. What exactly does OG stand for? The suggestions are as varied as “original gangster” – referring to its status as one of the building block strains – to “ocean grown”, referring to its Californian coastal origins.

What cannot be debated, however, is this strain’s impressive potency. It has a THC composition which is measures consistently at around 20-25%.

The Heritage Of OG Kush

As we’ve already pointed out, the origins of OG Kush are fairly obscure. That means that its specific genetics are also shrouded in mystery. While there are numerous legends about the origins of this strain, the truth is, as yet, unproven.

Nevertheless, perhaps the most likely account to explain this strain’s origins is as follows:

In 1993, a northern Californian grower obtained the Chemdawg strain. He then shared it with another grower in Sunset Beach who stated that he had a “secret ingredient” male plant which was perfect for crossbreeding. This male crossed an Old World Paki Kush with Lemon Thai and turned out to be the perfect blend with Chemdawg. By 1995, these buds had achieved notoriety in LA.

In the intervening years, countless breeders have used OG Kush as the backbone of their new hybrids. Even now, new descendants of the OG Kush strain are constantly being developed due to the tasty flavor and potent high that it produces as well as its impressive range of medical benefits that it can offer.

This strain features medium/large nugget-like buds which have an indica-like dense structure. Its leaves have a yellow/green color, although there are some phenotypes which have purple traces due to the anthocyanin pigments which become activated during periods of cold weather. The pistils are vibrant orange, and make these flowers very noticeable.

The trichome covered buds are silvery white in color and very sticky. When they’re cured properly they have a musty, earthy aroma which has a touch of citrus in its overtones. Once you burn the buds, the odor is more pine-like and the smoke is fairly harsh, stinging your sinuses and making your eyes water. In taste, the smoke is spicy and similar to traditional indicas both on the exhale and inhale. The odor also hangs around for some time even after you’ve finished smoking it, so it isn’t the most discreet of strains.

The high you’ll experience from this st

rain is definitely head-focused as opposed to physical. It begins with the powerful headrush that intensifies colors and sounds then gives way to an uplifted mood which rapidly turns into euphoria.

Users don’t experience any disorientating mindracing with this strain, but it does prompt mental stimulation. When paired with the mood improvements it induces, OG Kush is a wonderful strain for use in social situations – perfect for lively conversations and parties. Lots of users report that OG Kush is a good choice when exercising or video gaming – pretty much any activity which involves both mind and body.

OG Kush For Medicinal Use

If you’re planning on using OG Kush for medicinal purposes, you’ll find that it’s an excellent choice for alleviating depression and anxiety. It’s also useful for those with ADHD or ADD since it increases your focus. This strain is known for the practical relief that it offers to those suffering from chronic pain thanks to the cannabinoid profile which numbs and relaxes while reducing inflammation.  It can also address sleep disorders when consumed in larger doses in the form of concentrates or edibles. Migraines and headaches may also be relieved by this strain but it’s important to be aware that, at high doses, this strain could induce paranoia.

You can grow OG Kush seeds either outdoors or indoors, but if you’re planning on outdoor cultivation you’ll need to ensure the temperatures remain consistent at about 75 degrees Fahrenheit, and you’ll also need to sure that your plants get plenty of direct sunlight as well as sufficient water. In short, it can be really complicated to get the outdoor conditions right to produce the best results and therefore growing indoors is, therefore, a lot more convenient in most cases.

The plants are quite bushy and short, only growing to a height of around 2-3.5 feet. Topping helps the air and light to reach the lower branches and their flowering nodes and hydroponics work well with this strain. If you grow OG Kush indoors, you’ll find that flowering takes place within around 9 weeks, and the average yield is about 45g or 1.6 oz per square foot when grown indoors (or 14-18oz per plant if you’re going to be growing outdoors). Be aware that this is a pungent strain, and that means that exhaust fans or carbon air filters in the growing space will be needed to maintain discretion.

It certainly isn’t the easiest strain to grow successfully and is best reserved for experienced or professional growers. Beginners would be advised to look elsewhere for good starter strains for growing at home.

When To Enjoy OG Kush

Thanks to the uplifting and mildly energizing effects that OG Kush products, it’s perfect to enjoy during the day or in the early evening. The positive effects it produces makes it ideal in social settings, or even for use while alone if you’ve got tasks that need to be accomplished. This is also a genetically stable strain, which is why it’s used regularly as a building block for creating popular and successful crossbreeds such as Bubba Kush. It has also offered up a number of phenotypes which have become well-known strains themselves such as Alpha OG and Pineapple Kush.