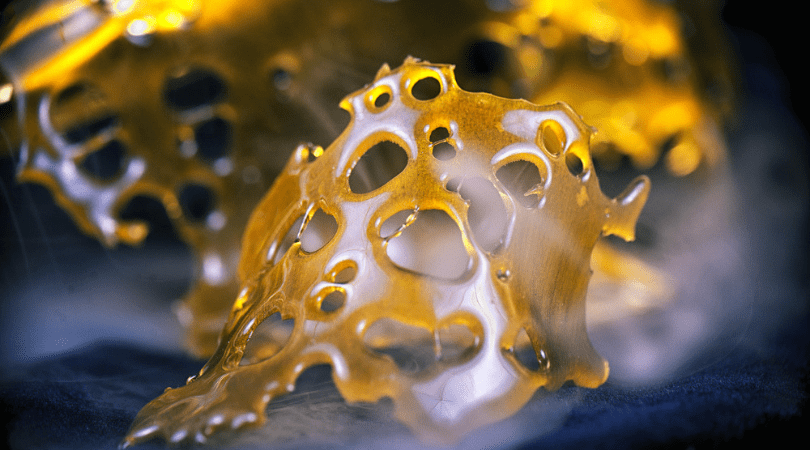 Whether you’re new to cannabis or whether you’re an expert, shatter could be just what you’re looking for. Shatter can pack up to 90% of cannabis-derived compounds. This means that it has a powerful punch. Cannabis plant potency is already increasing, and many strains now have concentrations of THC over 20%. Even compared to this, shatter offers a much harder hit. It is for this reason that true cannabis connoisseurs now prefer to use concentrates. These come in many forms, from budder and oil to bubble-melt hash. However, shatter is one of the most powerful and potent.

What Exactly Is Shatter?

Shatter is a term used to describe a specific form of cannabis extract concentrate. It is a type of dab. These are extremely concentrated extracts which are full of CBD and THC. Wax, budder, honey and taffy are all types of extract as well as shatter. These extracts are made using a process that uses industrial solvents such as butane.

Shatter is produced by soaking marijuana plants in butane before heating them to get rid of the solvent. What remains is butane hash oil (otherwise known as BOH). Shatter is one form of BOH, and one of the most potent forms of it.

Why is butane hash oil so potent? Butane binds to the crystal-like hairs called trichomes on marijuana buds. When heat is applied and the butane eliminated, the remainder is a crystallized cannabinoid concentrate. This concentrate includes terpenes, CBD, and other cannabinoids as well as THC.

Shatter looks similar to glass with its translucent properties. It is also very hard and brittle, and, as you may guess from its name, it shatters easily. This is because of the way in which it is produced. Its production method includes no agitation or irritation. Shaking creates a creamy and cloudy texture and appearance. This is why marijuana wax looks very different although this too uses a BHO method of production.

What Are The Origins Of Shatter

Although shatter is a relatively new development, it has roots tracing back to hashish production. Although cannabis has been used for centuries, it was only in the 1990s that concentrate production processes were refined. This was when shatter was initially produced. A second edition of Cannabis Alchemy: The Art of Modern Hashmaking, a book by D. Gold was published in 1989. This included a complete explanation of how hash was made.

In 1990, Michael Starks, a medical technologist published a new edition of his book Marijuana Chemistry: Genetics Processing and Potency. This too included a detailed description of the process to produce hash.

Less than a decade later, BudderKing launched Budder and Shatter onto the market. These Canadian manufacturers brought their products to dispensary shelves in 2003. Two years later, the techniques used to produce these products were revealed in Cannabis Culture Magazine.

Shatter had emerged by the 2010s as a staple form of consuming cannabis. Dab rigs could be found alongside bongs on smoke shop shelves. A trend began that has continued unabated today.

How Do You Use Shatter?

When using shatter, you often use a method known as dabbing. This requires the use of a dab rig which is heated to make a vapor which is then inhaled. Dabbing isn’t the same thing as smoking. Dabbing involves vaporizing marijuana by heating the concentrate. This is extremely different to putting dry herbs in a bowl, lighting it and inhaling. The flavor from dabbing is much purer and cleaner. Also, the cannabis vapor contains no unpleasant toxins which are found in smoke. This could mean that dabbing is healthier.

To dab shatter, you need to follow this method:

If you’d rather smoke shatter, you can use a regular pipe. Just leave some space on top of your dry herbs then crumble some shatter over it. You can then light up and inhale. You can also add shatter to your joint in a similar way.

What’s The Difference Between Shatter And Wax?

Both cannabis shatter and wax are very potent. However, there are some differences between them both.

Is Shatter Better Than Regular Weed?

Until around 2005, most people smoked hash or weed. However after that point, dabbing started to become more common. Dabs in one form or another have been around since the 1940s. However, it wasn’t until quite recently that the concept became widespread. The process of making concentrates has been refined in recent years and now it has been perfected. So, which is best – regular weed or shatter?

The answer to this lies in your response to the following questions:

If your answer to all three is yes, shatter is right for you.

Shatter is one of the most pure types of cannabis extract. It also boasts some of the very highest content of terpenes of any concentrate. This means the high it produces is lasting and intense. Shatter is much more potent than marijuana flower. Its effects are also much faster and more intoxicating.

If you choose to use a dab rig for your shatter, you can get the best possible experience. You’ll also benefit from pure-tasting weed since you’ll be inhaling vapor not smoke. As minimal odor is produced, you’ll also find this a much more discreet option.

Is It Legal To Use Shatter?

Generally, shatter is illegal in the USA except in states where recreational use is legal. It’s therefore very important to check the legal situation where you live before buying or using shatter.

Not all states which have legalized medicinal cannabis permit the use of shatter. Some people believe shatter is more effective at reducing pain and helping treat medical problems than regular marijuana. However, others believe the leftover impurities from its production negates the positive benefit of a concentrated dose of THC.

Interestingly, concentrates like shatter have shown aromatherapy is a therapeutic tool. A known terpene in weed known as myrcene increases the volume of THC crossing the blood/brain barrier. As a result, myrcene is believed to boost the effectiveness of some other medications. Unfortunately, this potential has yet to be fully exploited by the medical community. More research will need to be carried out to demonstrate this and prove its benefits to the full.

In recreational legal states, however, you can have weed extracts like shatter delivered to your home. You can also pick it up in some local dispensaries. Sometimes, however, you may need to put a special order in since all shops have different lines in stock.

Bear in mind shatter costs more than standard flower. You should also check for purity – if your shatter is suspiciously cheap, it could be poor quality. You can expect the cost of shatter to be around $50 – $70 per gram.

What Is CBD Shatter?

CBD shatter is a form of shatter which contains only cannabidiol and no THC. This means it produces no high. It’s ideal for anyone wanting to benefit from CBD’s medicinal properties but with no euphoric effects. CBD shatter is helpful in the following ways:

How Do I Store Shatter?

If you don’t store shatter properly, it’ll began to degrade. As a result, its initial potency, flavor and consistency will be lost. You can prevent this from happening, however. Always store your shatter in a light-proof, airtight container. Ideally, you should keep it in a cool place. You should always protect your shatter from moisture, high temperatures, direct sunlight, UV rays and oxygen. This will help to preserve its consistency.

It is especially important to keep shatter away from heat. Heat will cause the terpenes and cannabinoids in the extract to be activated. In a perfect world, this would only happen when you’re consuming it and it shouldn’t take place in its container. You can easily buy storage accessories for storing concentrates like shatter safely. These can be fund in smoke shops, online stores and in dispensaries. Silicone containers are ideal for this purpose.

What Is The Difference Between Shatter And Budder, Crumble And Sugar?

Cannabis extracts come in a range of consistencies, colors and textures. However, all are made using a similar process of production. However, if specific factors aren’t properly followed, the end result may be very different from that desired. If the solution is mishandled or the shatter isn’t correctly stored, it may change form.

When vacuum purging or initial extraction aren’t properly carried out, shatter’s glasslike consistency could be compromised. As a result, the final product will have a texture which is more like sugar or butter.

If, during the production process, the extract is exposed to high temperatures, leftover moisture, residual solvent or agitation, problems occur. Instead of making shatter, the end result could be budder. This doesn’t have the brittle hardness of shatter.

Can I Make My Own Shatter?

It’s very important to be safe when making shatter yourself. You could probably benefit from an experienced chemist’s help. For anyone with little or no experience, buying shatter is a much safer option. This is because if you accidentally leave too much solvent in your shatter, your health could be at risk. You don’t want to inhale butane into your lungs.

As you can see, it isn’t very easy to make shatter yourself. However, buying it from a reliable supplier is a convenient option for those in legal states.

Is Shatter For Me?

Shatter can be more expensive than regular flower. It may also be more complicated to smoke. However, it does offer a much more potent experience. If you’re an experienced user, you may find that your experience is the same as using for the first time! However, if you use shatter in very small amounts, you should find the effect excellent.